I typically “celebrate” my dogs’ birthdays — nothing big and ridiculous, just a trip to the pet store for a special treat/toy followed by an adventure, just the two of us (plus camera).  This year, Belle’s 6th birthday happened to fall on the day my roof was being replaced — with all the loud banging and strangers wandering all around the house, I thought it best to stay home with all the creatures.  I didn’t want a repeat stunt from Bear – and though Birdie’s been fine in thunderstorms, I didn’t know how she’d react to the roof falling in (at least, sounding like it).  Anyway, I planned on taking Belle out the following weekend….

But that weekend she suddenly developed an ugly, red, quarter-sized sore on her nose.  It sort of looked like she’d scraped it on something – maybe the flashing on the bottom of the shed or the bottom of the fence – except it wasn’t really scratched looking and it was slightly raised.  It didn’t seem to bother her, but it bothered me.  So, rather than a fun adventure, we headed to the vet.

Side note:  I’m in a vet office all too frequently – it seems that there’s always something.  This year alone, we’ve been in for annual check-ups for the big kids, a lot of visits related to Harley (blood tests, rehydration, medication adjustments, and ultimately euthanasia), multiple Birdie puppy check-ups and vaccinations, an extra de-worming for Birdie (tapeworms), refills on heartworm/flea preventative, and, most recently, Belle’s nose issue and a new issue with Birdie (more soon).  Not to mention the fun with Jet (though we went to two different vets for that episode – and actually, he was neutered at a third).  So, yeah, I’ve spent a good amount of time (and money) at the vet.

Anyway, Dr. Murphy looked at Belle’s nose and concluded it was either a bacterial infection or ringworm.  Hoping for the former, but having to treat for both since the latter’s contagious (to the dogs and to me) and unfortunately, the scrape test takes two weeks to determine if it is fungal (ringworm).  So we left with both an anti-bacterial and an anti-fungal.  [There are times when having big dogs is a pain – like when paying for their medications.]  Results from the scrape came back this week and it turns out it was bacterial – which I had guessed since none of the rest of us developed similar sores, but it was nice to have confirmed.   So, now that she’s almost completely healed and it’s been confirmed it was not contagious, we’ll have our day soon.  Since I’m already way late, we may just have to wait for the heat to break a bit.

my girl’s 6 » thank Dog. photography - […] and I finally had our solo adventure for her 6th birthday this past weekend (only 2 months late).  She’s my water dog so we went… to water.  She’s easy enough to please […]

How cute is Jack?!?  Something about doodles makes me smile – and Jack’s no exception.  It always surprises me how little they weigh – they look much bigger.  Adds to their muppet-like quality, I suppose.

People often worry that I won’t be able to get the typical shots because their dogs can’t be 100% trusted off leash — but, in fact, most of the dogs you see on here were actually on leash (including Jack).  I have a couple really long leads that I usually bring with me that still give the dog plenty of room to run and play.  And, unless your dog is like one of mine and manages to have it wrapped around herself 18 times before so much as taking a step, it’s pretty easy for me to remove in post processing. 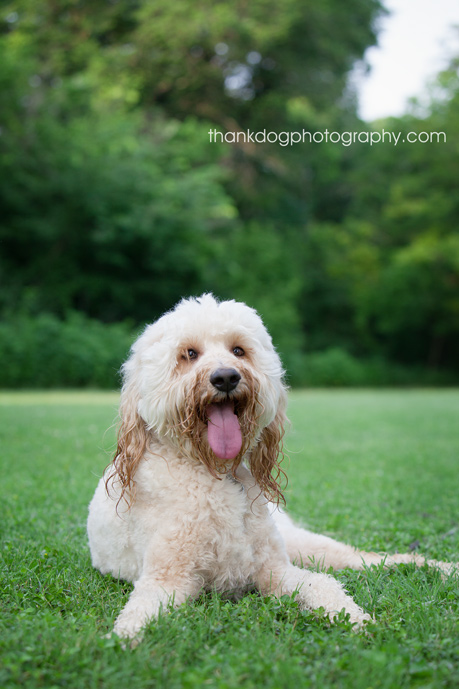 Thanks to everybody that stopped by the booth at the Dallas Pet Expo last weekend!  It was a very busy day – but it was great to meet so many of you.

And extra thanks to those of you that entered the drawing for a free session.  I enlisted Belle’s help in selecting the winner….

And she chose a pair of fellow giant dogs – Bella & Buck, the Danes!

Angela - Oh no, I am so sorry Debbie. Poor Little Harley. He had quite an interesting life – living in Switzerland, spending a summer as an outdoor cat, holding his own with the dogs. I know how much this stinks, even though he was older and had a good life. Estelle sends her condolences as well by meowing at max volume in my face right now.