I recently headed to Austin to shoot Chip & Brownie, the official mascots of Barking Hound Village (Dallas and Austin).  It’s only fair they’re the mascots – their parents own the place!  Our session was actually a double session so rather than one super, ridiculously silly long post, I’m going to break it down into two just regular long ones.

We started at Hotel St. Cecilia.  FAB-U-LOUS.  Luckily, Lisa and Jeremy  (and Chip and Brownie) are regulars so we were permitted to shoot on the grounds for a little while (I could have spent hours and hours!).  It’s located just off Congress, but it feels pretty isolated, like it’s own little happy oasis.  Saint Cecilia is the patron saint of music and poetry – very Austin – and the hotel supposedly has a reputation for being the place for musicians to stay when they are in town.  Totally believable – it’s gorgeous, and so so very cool.  I’d have loved the chance to explore more!  [You can see a little more in the sneak peek I posted last week.]

Chip is the old man – he’s 13 now and is stiffening up a bit.  The back end doesn’t work quite as well as it once did (poor thing struggles getting up on slicker surfaces), but looking at him, you’d swear he was years younger.  He’s a super sweet old chocolate boy – still so very handsome.  Brownie’s 6 1/2 now and is smart, quick, and very businesslike – there are jobs to be done, and Brownie’s got them covered. 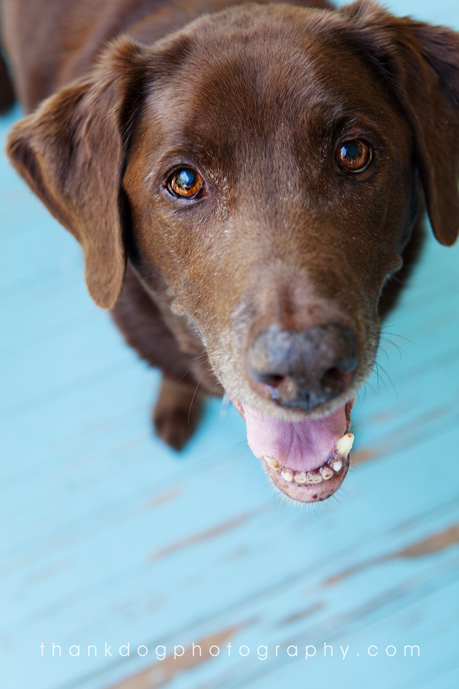 Stay tuned for the part two!

Rebecca - Debbie, I may be dense here, but which one is Brownie and which one is Chip? I’m guessing Chip is the lab and Brownie is the little sprite. In any event, those pictures are amazing and it is evident you had a great time taking them. Their eyes say it all.