Or “LiLouBo” as I’ve been calling them in my head.

Monica won a session for her two monsters, Lila and Louie, at a Legacy Boxer Rescue silent auction (LBR is the organization that helped me get Cash healthy and find him a new home).  Both were described as pit bulls or pit mixes, but I think Louie might be more American Bulldog.  I met them at their absolutely adorable home and was immediately greeted very enthusiastically – like my house, it’s better if visitors are dog lovers so they can really appreciate all the love being showered on them!   She’s also the foster mom  to Beau, but I’d be surprised if he doesn’t end up a permanent addition to the pack (he already fits in seamlessly).

Ms. Lila is a relatively petite girl – but with an impressive set of ears.  She’s the oldest of the pack at 6, but you’d think she was still a puppy.  She very much wants to be the center of attention and wants to “help” at all times.  And she’s got a big, giant, happy smile. 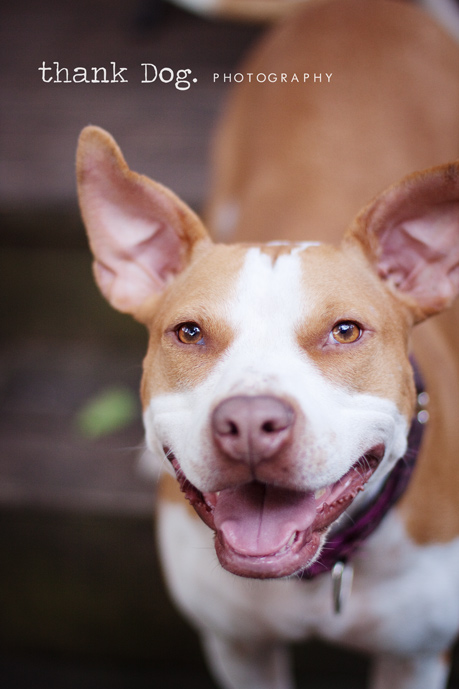 Louie’s only two, but he’s assumed the “man of the house” position.  Very sweet and friendly, just less enthusiastically so as compared to Lila.  His mom described him as a bit more of a loner, and it’s true — when he has had his fill of attention, he’ll wander off for a little Louie time.  Though he may actually just be reassuming his sentry position.  From the table out on the back porch (standing on top of the table), he can not only see his own yard, but he can also survey the neighbors as well.  And don’t think he doesn’t monitor that chihuahua’s comings and goings.

Since Monica’s fallen in love with Beau, we couldn’t leave him out!  He’s a goofy, extremely lovable, polka-dotted white boxer with the softest fur ever.  Seriously, he gives Cash a run for his money for cutest boxer ever.  He and Lila are big buddies – and I think Louie’s grateful to have Beau to entertain Lila so he can take care of business.

sarah - these are so great! her ears! his face! the spots! LOVE.

Carly - Love these images!
What is it about the face of a Pitty…. they ALWAYS make me smile!!
All 3 dogs are adorable!

Briana - What beautiful, loveable babies! 🙂 Louie has magnificent eyes- LOVE the ‘charcoal liner’ effect he has going on. 🙂 He almost looks like, if he had a person voice, he’d be regally British. Again, wonderful job Debbie!

Lisa - All three dogs are gorgeous! I’d have to keep Beau myself.
I suspect Beau is also American Bulldog – he looks much like my AmBull, Leroy!

Nancy Higgins - OMG, these photos are beautiful. The photographer did a great job in catching these shots! You all make a great pack!